President of AIS awarded the Business Economist of the Year prize 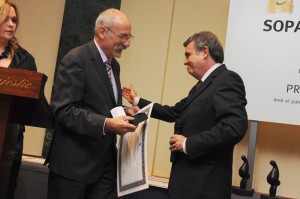 The College of Economists of Catalonia has decided to award the prize of Business Economist of the Year 2010 to the President and CEO of AIS, Ramon Trias. The jury has seen fit to honour the major entrepreneurial and innovative spirit he has shown throughout his career as a business economist in the new technology sectors.

According to the jury, the reason for the appointment of the economist, Ramon Trias Capella, as Business Economist of the Year 2010 is his career leading the company AIS (Aplicaciones Inteligencia Artificial, SA), of which he is the founder and currently principal shareholder and president. The company is a leading force in the financial sector in the field of risk analysis, both within Spain and at an international level.

The jury also highlighted his commitment to continuing professional training. This has led him to working selflessly with several institutions involved in training programmes, especially the College of Economists of Catalonia. The awards ceremony for Business Economist will be on Thursday 11 November during the Economists Dinner to be held at the Hotel Majestic in Barcelona.